"Conversation is the most powerful tool for communicating our understanding, ideas, feelings, and confusions with each other." 1

While children are born with an innate ability to communicate, the art of conversation requires a lot of learning and practice.

Serve and return is what tennis players do to keep a game going. It is also the term used to describe the back and forth interactions that take place between adults and children in conversations. Knowing how and when to take turns is the first step in learning to converse with others.

Taking turns in conversation is vital when so many new brain connections are forming. Turn-taking is more important than the total number of words adults use with children. This is because talking with children rather than talking at children gives them a chance to use their new sounds, words, and sentences.

With infants and toddlers, sometimes their serve will be a gesture, glance, or kick of their legs. Build your response on the ways infants communicate, especially through tone of voice and facial expressions.

When kaiako name and talk about what children are already looking at or playing with, children learn new words and concepts much faster than if kaiako redirect their attention to a new object. Allow wait time. Like adults, children often need time to process their response. If they feel under pressure, they are less likely to continue the turn-taking talk.

To help children learn the back and forth pattern of a conversation include games that involve turn-taking such as Mili mili pati ā (Sāmoan chant), Peek-a-boo, or I spy.

As the kaiako, you will be the one who puts the work in to extend the conversation. Children will let you know when they’re finished.

An example of serve and return

Infant SERVE: (Points to a ball.) 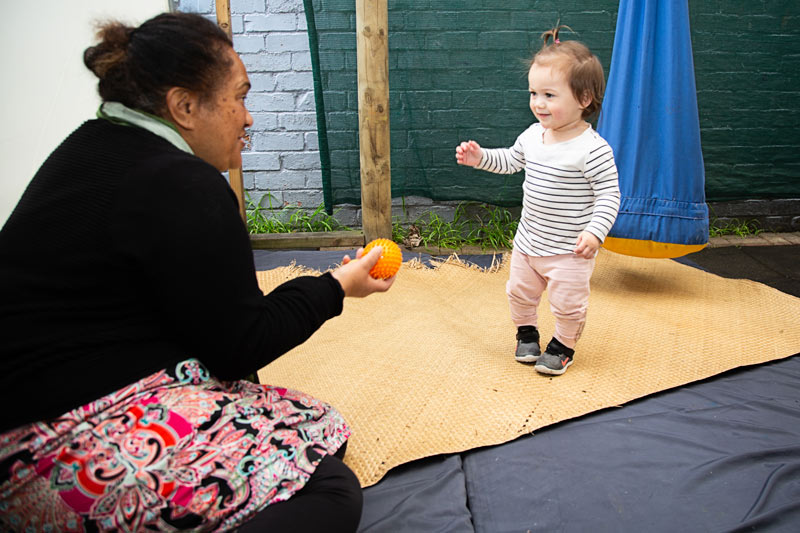 Remembering together at kai times and during care rituals

Kaiako reading a story to tamariki at the kai table
Valuing conversation means valuing times when tamariki can talk to each other as well as kaiako. Kai time can be particularly good for the back and forth – serve and return – pattern of conversations because it is when tamariki are less likely to be moving around. This is why it is important that kai times and care rituals are not rushed and kaiako can sit with tamariki.

Be mindful of diverse cultural practices around kai and talk.

Story of practice: Katakata/laughter in serve and return

Kaiako in a home-based service were introduced to the idea of serve and return, the importance of noticing and acknowledging these conversations, and the multiple ways of initiating and sustaining the serve and return.

A home-based coordinator recorded a kaiako engaged in non-verbal interactions with a three-month-old infant, using gestures and facial expressions as well as te reo Māori.

The kaiako exaggerated his response to an infant’s smile with a gentle, “Ahh pēpi.” He grinned, raised his eyebrows, and waited. Initially puzzled, the infant then replied with delight. Her whole body wriggled as she understood that her utterances were acknowledged. In response to the wriggling the kaiako said, “Katakata. Āe, katakata.” The infant put her head back and laughed, returning the kōrero. She waited, expectantly, for the kaiako to return the conversation. The conversation went back and forth for nearly a minute, strengthening the relationship between kaiako and infant and establishing a means of communication – laughter.

A group of children talk to each other while looking at a spider.
Play is where a lot of language is learnt and practised in conversations. This is why having frequent opportunities for uninterrupted play is so strongly advocated for in early learning settings.

Tamariki tend to interact differently with peers and kaiako and both offer good language learning opportunities. Making sure there is a balance between times when kaiako join in the play and when pēpi and tamariki are able to interact freely with one another is all part of curriculum design (planning).

You can use a range of strategies to build vocabulary and communication when you join in the play. Some examples are: 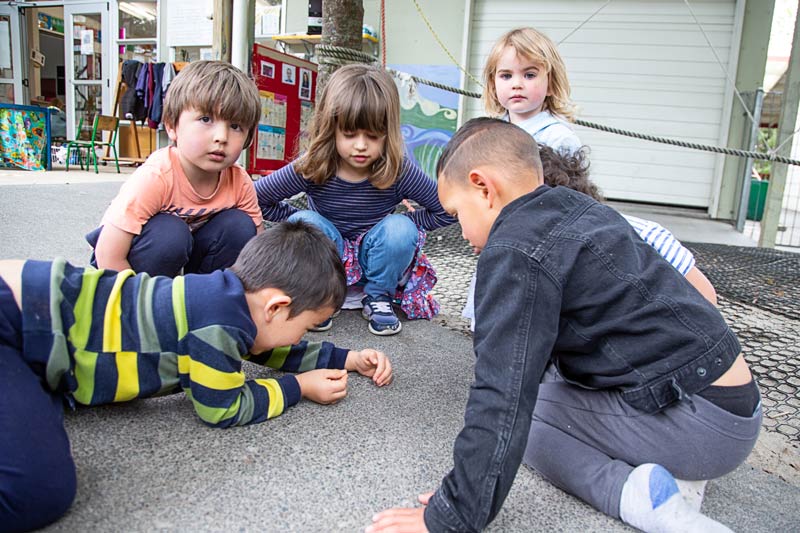